Roger Lawson of the Alliance of British Drivers is wrong when he objected to £913m being spent on a scheme that favours cyclists over other road users in London. (As reported by the BBC)

It is self evident from the picture on the front of his cycling plan that London Mayor Boris Johnson, and his sidekick cycling Czar Andrew Gilligan are doing a great service to London’s ‘beleaguered drivers’. By promising to build separated cycle lanes all over London. (And from that artists impression it looks like the cyclers won’t be able to leave their little lane) 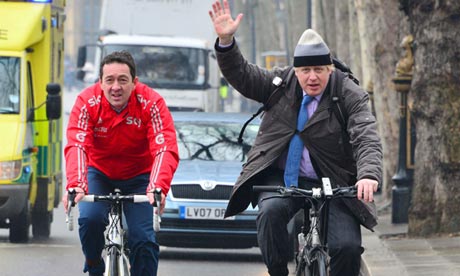 Drive along the Victoria Embankment today, you’ll encounter cyclists all over the road Not for long, once that segregated cycle East-West cycle lane gets built they’ll be out of our way. A small tweak in the law could then ban them from riding on our roads.

Another reason Mr. Lawson is wrong is that these lanes may well encourage some ‘drivers’, who would like to cycle but are scared to because of… er, drivers, to give cycling a go which will leave more room on the roads for the rest of us.

As to Boris’ plan to “de-Lycrafy cycling” making it look like a normal activity. That would do everyone a favour.

One thought on “Not ‘Bonkers’”